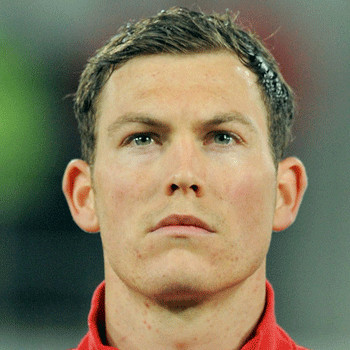 ...
Who is Stephan Lichtsteiner

He was born in Adligenswil, Canton of Lucerne. During his teenager he left his home to play for Grasshopper Zürich. His his first national match was on November 15, 2006 under Köbi Kuhn vs. Brazil.

It is said that his net salary is about 1.7 million euros. He weights around 75 kg.until today he has played 60 matches where his total goal scored is 4.

He got married with Manuela Markworth on 2010 who is and economist and a fitness instructor. Their daughter Kim Noemi Lichtsteiner was born on 30 January 2011 in Switzerland.

He is a major ambassador for the charity organization which sponsors health programs to prevent AIDS in Africa. In 2012 his team Juventus became the second runner up in Coppa Italia

He was nicknamed as "Forrest Gumps" from a commentator Guido de Angelis for making a run down his flank to score a goal against A.S. Roma