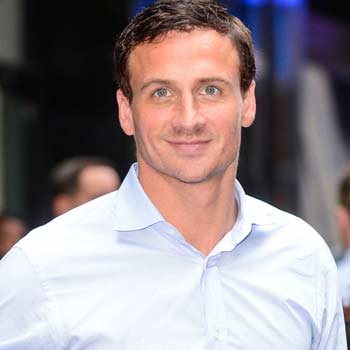 He was born to Ileana and Steven R. Lochte in Rochester, New York while grew up along with his younger siblings, Kristin, Megan, Devon, and Brandon. He went to Bloomfield Central Schools. He graduated from the University of Florida in sports management.

He was the member of the Florida Gators swimming and diving team. Ever since the body-length swimsuits were banned from competition, he is the only swimmer who set an individual world record. He is one of the well-paid Olympians and earns a lucrative amount from his career. He holds the staggering net worth of $ 6 million. He is a dog lover and has got two of Doberman and French bulldog breeds.

He tied the knot with his long-time girlfriend Kayla Rae Reid earlier this year on January 12, 2018, at the courthouse in Gainesville, Florida. The duo got engaged in October 2016 and finally took the vow after over a year-long of their engagement. They are blessed with a son, Caiden Zane Lochte together, born on June 8, 2017.

In 2004, he won a team gold medal in 200-meter relay followed by an individual silver medal in the 200-meter medley. Within 2006 and 2007 he broke several world swimming records and in no time he became first individual swimmer seven medals holder at the Short Course Worlds. Moreover, he was also awarded with SwimSwam's Sammy Award, The World Swimmer of the Year Award and the American Swimmer of the Year Award twice.

He was accused of fabricating an incident after vandalizing a gas station stating that he along with his fellow team USA swimmers Jimmy Feigen, Jack Conger and Gunner Bentz were robbed at gunpoint. The whole circumstances caused him to lose several sponsorship deals and endorsements. He later apologized for exaggerating the story via social media and in an NBC interview.