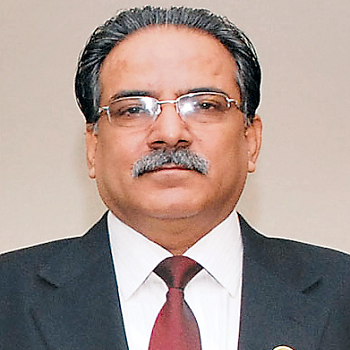 ...
Who is Puspa Kamal Dahal

He was born in Dhikur Pokhari, Kaski. His mother's name is Bhawani Dahal. His father's name is Mukti Ram Dahal and he died because of cancer. He attended Institute of Agriculture and Animal Science and received a diploma of science in agriculture.

His birth name is Chhabilal Dahal. His family was poor farmer. When he was in Chitwan, once a school teacher indoctrinated him in communism. In 1981 he joined the Communist Party of Nepal. He wears glasses and his hair is white.

His brother's name is Dr. Ganga Ram Dahal. He spent his childhood and youth in Chitwan as he moved to Chitwan with his family when he was 11 years old. He is a happily married man. His elder daughter Gyanu died of illness.

He is a rebel leader. He is a successful politician. He became a member of the politburo and later became general secretary in 1989. In April 10 2008 he won 220 seats becoming the single largest party in 601 member Constituent Assembly.

There were rumors about his son to disappear with a married Maoist student leader.