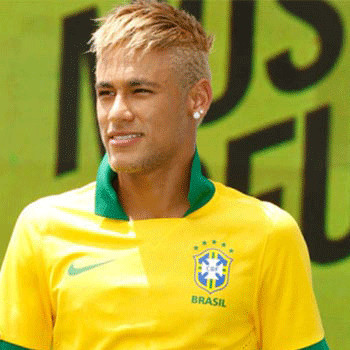 ...
Who is Neymar Santos

Neymar was born in Mogi das Cruzes, São Paulo, Brazil. His father is also former footballer from whom he got motivation and support for playing football.

He nearly joined Real Madrid when he was 14 years old. In history of Time Magazine, Neymar is only one Brazilian player whose photo was in the cover of the magazine. He is the seventh richest footballer in the world.

Neymar has one son named David Lucca da Silva Santos from his former girlfriend Carolina Nogueira Dantas. But they got separated and never married. Now he is currently dating Soraja Vucelic.

Currently there is great controversy that he is being transferred from Spanish club FC Barcelona for €100 Million.He also created a great dispute from homophobic underwear ad.

The Brazilian professional footballer Neymar (Neymar da Silva Santos Junior) born in 5 February 1992 who plays for the Brazil National team as a forward of winger, and is also the captain of the national team. His current team is Spanish clubFC Barcelona. He won the 2011 South American Footballer of the year award at the age of 19. He inherited his name from his father, who is former footballer and became his son’s advisor as Neymar’s talents began to grow. In 2003, Neymar moved with his family to Sao Vicente, where he began playing for youth side. Later, they moved to Santos where Neymar joined Santos FC. With the success of his youth career and added income, the family bought their first property, a house. Neymar signed a full professional contract, getting upgraded to the Santos first team and even receiving sponsorships at the age of 17.
Neymar’s Football career began from Youth. He joined in Portuguesa Santista in 1999 to 2003. Later he joined in Santos up to 2009. His senior career is also begun from the Santos team since 2009 to 2013. He played for nation from different national team from 2009 to 2012. He is the versatile footballer. He primarily plays as a central striker, second striker, and winger or occasionally as an attacking midfielder. Neymar’s dribbling skills and playmaking ability is reminiscent of compatriot Ronaldinho. Neymar honored by several awards as a prominent and dashing football player. Unfortunately, his back is break in last FIFA which becomes the curse for his team.
Neymar married with Carolina Dantas and have a baby in August 2011 at the age of 19, but Neymar is not in relationship with her. He has a very close relationship with his sister Rafaela Backran, and cemented this closeness by tattooing her face on his arm, while Beckran tattooed her brother’s eyes on her arm.