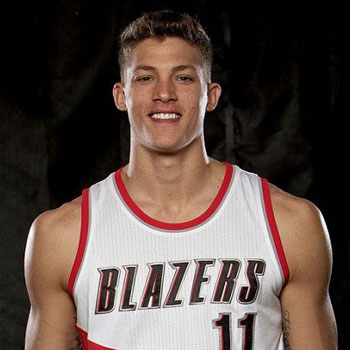 ...
Who is Meyers Leonard

He attended Robinson High School where he played as a guard. During high school, he was inducted as a member of 2010 Illinois All-State Team as selected by the Associated Press, Chicago Tribune, Chicago Sun-Times, News-Gazette, and the Illinois Basketball Coaches Association. He then attended the University of Illinois, where he played from 2010 to 2012.

Leonard and Elle Bielfeldt reportedly started dating in 2011. The couple happily dated for more than three years and the two got engaged over Memorial Day weekend in 2014. Later in 2015, the duo celebrated their wedding in the presence of some important guests and relatives. He owns a dog which is of the Siberian Husky breed. His older brother, Bailey, is an officer of U.S Marine.

To date, he has not faced any rumor or controversy