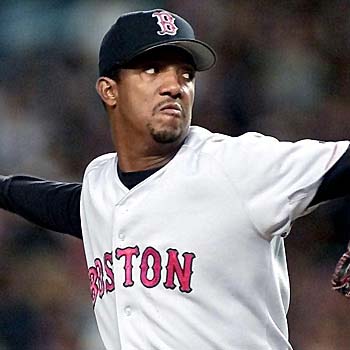 ...
Who is Pedro Martinez

Pedro Martinez was born in Monguayabo, Dominican Republic as Pedro Jaime Martínez to Pablo Jaime Abreu and Leopoldina Martínez. When Pedro was old enough to work, he held a job as a mechanic.

Pedro Martinez made his debut against the Cincinnati Reds in 1992. He signed a four year deal with the New York Mets on Wednesday, December 15th, 2004. The deal is reportedly in the neighborhood of $53 million.

Martinez has been married to Carolina Cruz, an ESPN Deportes since November 9, 2005. There is no information about their children and about their divorce.

Baseball Hall of Fame pitcher Pedro Martínez won three Cy Young Awards (1997, 1999, 2000). In 2000 and 2001 he has won Best Major League Baseball Player ESPY Award. He was twice named the AL's top pitcher before helping the Boston Red Sox win the 2004 World Series. Martínez was elected to the Hall of Fame in 2015.