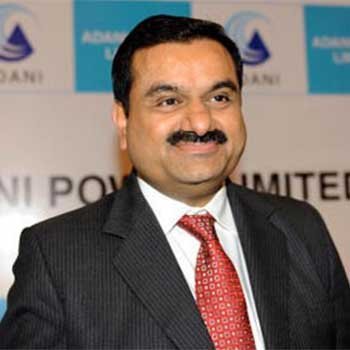 Gautam Adani was born in a Gujarati Jain family to, Shantaben and Shantilal Adani who had migrated from the town of Tharad in northern Gujarat in search of a livelihood. He did his schooling from Seth C.N. Vidyalya School in Ahmedabad. Later, he studied at Gujarat University but only till his second year for a Bachelor's Degree in Commerce as he was a university dropout.

As of June 2016, Forbes has estimated Adani’s net worth to be around $4 billion. He founded the Adani Power Limited, the power business subsidiary of Adani Group, in 1996. The company is India's largest private power producer and also the largest solar power producer of India.

Gautam Adani is married to Priti Adani who is a dentist and heads Adani Foundation as a Managing Trustee. They have two sons - Karan Adani and Jeet Adani.

In January 2014 the Adani Foundation was awarded the 3rd Annual Greentech CSR Award.

During the time of 2014 Loksabha elections of India, Gautam Adani was accused of various controversies. He was being accused of supporting Narendra Modi for his campaign in Bharatiya Janata Party.

Australian entrepreneur, author, filmmaker, and advocate, Joe Cross is best known for his documentary Fat, Sick & Nearly Dead. He is also the founder and the CEO of Reboot with Joe, a health and lifestyle brand.