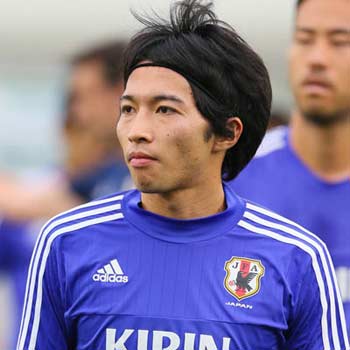 ...
Who is Gaku Shibasaki

Since his childhood, Gaku Shibasaki was passionate about outdoor sports. He joined Aomoriyamada High School, where he played football for two years. He also represented Japan at the U-17 levels, from 2007 to 2009.

Gaku Shibasaki came into the limelight after scoring twice for Kashima Antlers in the final of the 2016 Club World Cup against Real Madrid. Eventually, Real Madrid won the match 4–2 albeit in extra time, after a hat-trick from Cristiano Ronaldo. On 31 January 2017, Shibasaki signed a six-month contract with Spanish Segunda División side CD Tenerife. On 19 March, he made his debut for the club replacing Aitor Sanz in a 1–0 home loss against CF Reus Deportiu. On 17 July 2017, Shibasaki signed a four-year contract with Getafe CF, recently promoted to La Liga. He was also selected in the Japan national team for FIFA World Cup 2018. His current market value is £1.62m, and his highest market value was £1.80m, while he was the player of Kashima Antlers.

Gaku Shibasaki has not shared any info when it comes to his affair, girlfriend, relationship, and dating history. He might be engaged or single, but without a guess, it is quite difficult to say anything about him.

Gaku Shibasaki has never been the part of any rumor and controversy.