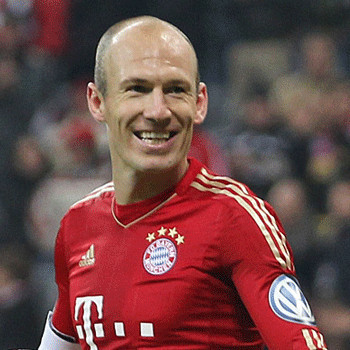 Robben was born in Bedum, north-eastern Netherlands. He started to play football from early age and he began playing for local clubs like C.V.V.B and V.V. Bedum.

He also played for famous clubs like Chelsea and Real Madrid before joining Bayern Munich. Robben is popular for his speed, dribbling skills, crossing ability and most of all for his precise left foot long-range shots from the right wing.

He is married with his high school sweetheart Bernadien Robben-Eillert. He have got three children named Lua, Kai, Lynn. There is no record of any affair of him.

In 2005 he won "Bravo Award" and in 2010 he won "Footballer of the year in Germany" for his performance in game. He won Man of the Match award in European Cup 2013 final.

He has been involved in lots of controversies in his career and he has developed a reputation as a "diver" because he mostly get fouls for jumping over advertising boards to celebrate his goal.