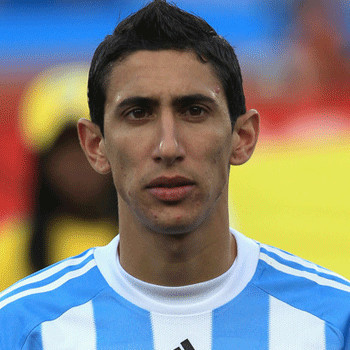 He was born in Rosario, Argentina and spent his childhood in Perdriel.. His parents are Miguel Di María and Diana Hernández de Di María. He have two sisters named Vanesa and Evelyn. His family was very poor in his early days.

His full name is Ángel Fabián di María Hernández. He belongs to white ethnic background. His face is dark brown and hair is also colored in dark brown. His weight is 75 kg. He have a nickname Fideo which means Spanish in noodle.

He is happily married to his beautiful wife named Jorgelina in 2011. The couple is blessed a beautiful daughter named Mia but she was three months premature. She survived at an intensive care unit in Madrid at the Hospital Universitario Montepríncipe.

His salary is 3 million EUR. In 2008 he was awarded with Olympic gold medal. He became Man of the Match in 2014 UEFA Champions League Final. He became part of FIFA/FIFPro World XI in 2014.

He was rumored to sent back in Real Madrid.