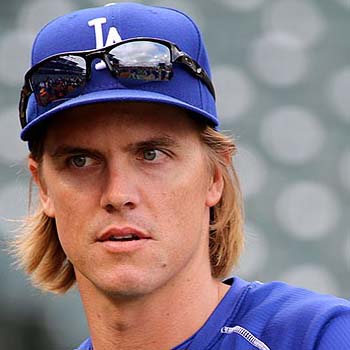 Donald Zackary Greinke was born in Orlando, Florida, to parents Donald and Marsha Greinke both school teacher. He is an alumnus of Apopka High School.

American professional baseball player Zack Greinke has an estimated net worth of $30 million. Greinke has been described as a "scientist as a pitcher" and is known for preparing for each start more extensively.

Greinke is married to Emily Kuchar, Miss Daytona Beach USA 2004. They first time met in Apopka High School. They together has son, Bode born on July 23, 2015.

Zack Greinke signed a six-year contract with the Los Angeles Dodgers and was granted an opt-out clause after 2015. Rumors suggest he's going to exercise opt-out clause and hit free agency at the end of the year.