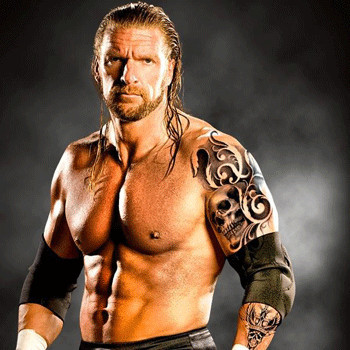 He was born in Nashua, New Hampshire. He started watching wrestling when he was five years old. When he was 14 years old he started body building. In 1987 he graduated from high school. In 1988 he won Teenage Mr. New Hampshire.

He holds American nationality. His birth name is Paul Michael Levesque. He is also known by his nick name Terra Ryzing but mostly known by his stage name. He weighs 116 kg.

He dated Stephanie McMahon for a long period of time. He then got married to her on October 25, 2003. The couple is blessed with three daughters. He previously was in relationship with Chyna.

Triple H salary is $1.5 million. His net worth is estimated to be $25 million. he have numbers of fan following him in his social networking sites. He also have won 2002 Royal Rumble. In total he have won 26 championship.

There was rumor that Sting is going to fight Undertaker against him.