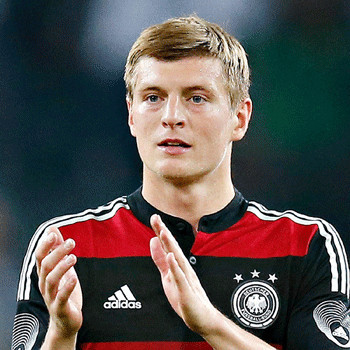 He was born at Greifswald, East Germany. His father name was Roland kroos who works a youth coach for Hansa Rostock. From his early age he is interested in playing football an use to do a lot of practice.He was not a outstanding student.

He is White Ethnicity player having a weight of 78 kg.He has the net worth of 40 million Euros and salary is 12 Million EUR. He is very good at passing and through balls that's why he is known for his passing accuracy and ability to set up the goals.

Regarding to his personal life, he is a married man. His wife name is Jessica Farber and this couple has also got a son named as Leon.Except this he has got a older brother named as Felix Kroos who is also a football player.

There is no rumor about his personal life but there is about his career. There is a rumor that Manchester United want to sign him.