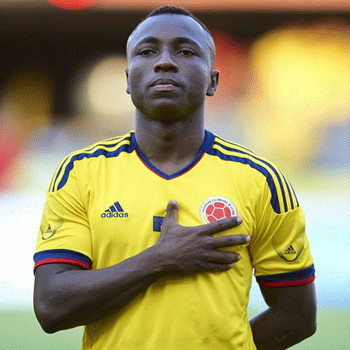 Armero was born in Tumaco, Columbia where he spent most of his childhood and began his professional football career from America De Cali where he helped win their 13th Championship and thus gained popularity.

He is of black ethnicity. He is currently 27 years old and weighs around 79 kgs. His salary is 1.3 million euros. his current market value is 7000000 euros. Pablo plays as a Left Back, Left midfielder.

Pablo is married to Maria Bazan. The couple have a child named Brando David Armero. There have been no rumors about the couple getting divorced or any extra marital affairs so it can be concluded that they are married happily.

Armero helped America De Cali win their 13th Championship. He has played an integral role in the 2014 World cup. He made his first international goal in the 2014 world cup qualifiers against Colombia's 5-2 win over Venezuela.

There have been rumors about his transfer from Milan which is fallacious. There were a few controversies after Pablo was loaned to Milan but other than that , he has not been subjected to any other controversies.