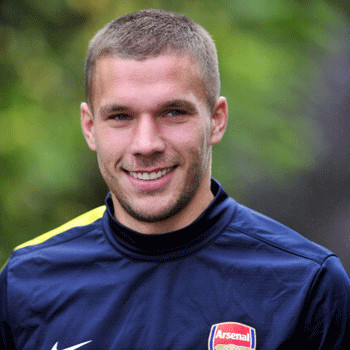 ...
Who is Lukas Podolski

He was born and spent his childhood in Gliwice, Poland. He started playing football at the age of six for FC 07 Bergheim. He later in 1995 joined 1. FC Köln where his skills and talent was identified.

He belongs to white ethnic background. He follows Roman Catholic religion. He have got white face. His eyes are blue and hair is dyed blonde in color. He weights 83 kg. His salary is 7 million GBP.

His parents are Waldemar Podolski and Krystyna Podolska. He is happily married man. He is married to beautiful wife Monika Puchalski. The couple is blessed with a handsome son named Louis Gabriel Podolski.

In 2006 he became the FIFA World CUp best young player. He also have won UEFA Euro 2008 Team of the Tpurnament and UEFA Euro 2008 Silver Boot. In 2006 and 2010 he was awarded with Silbernes Lorblatt award.

He was rumored to be liked by Arsene Wenger.