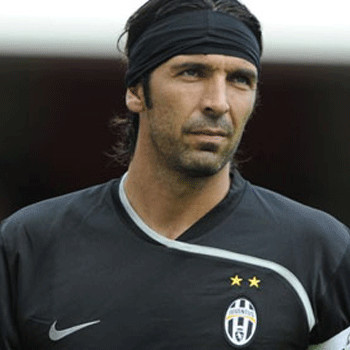 ...
Who is Gianluigi Buffon

He was born in Carrara, Italy. He was born in the family of atheletes. His mother Maria Stella, was a discus thrower and his father Adriano, was a weightlifter. His both sisters were the part of Italian National Volleyball Team.

He was declared one of the 100 greatest living footballers in the history by Pele. He is an avid poker player and also gambler and he was hired by PokerStars to publicize their products. He is catholic.

He is married to Czech model Alena Seredova since june 2011.The couple has given birth to two children, Louis Thomas and David Lee. There is rumor that couple is going to divorce due to his affair with Ilaria D'Amico.

He has been individually awrded with many awards like Bravo Award: 1999, Best European Goalkeeper: 2003, UEFA Club Goalkeeper of the Year: 2002–03, FIFA World Cup All-Star Team: 2006 and many more.

He has been involved in many controversy during his football career. He was in headline when he was accused of illegally betting on Serie A matches.