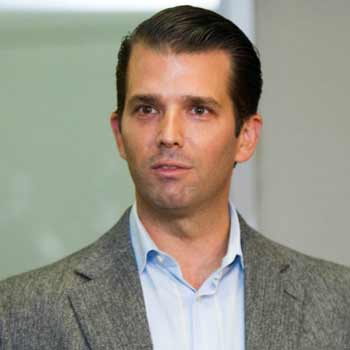 Donald Trump Jr. was born as Donald John Trump Jr.to Ivana and Donald Trump in Manhattan, New York City. He grew up along with his younger siblings Ivanka and Eric. He has two half-siblings Tifanny and Barron from his father's marriage to Marla Maples and Melania Trump. He spent most of his childhood vacations with his maternal grandfather Milos Zelnicek summer camping, fishing, hunting and learning the Czech language. He went to Buckley School and The Hill School in Pottstown., Pennsylvania. He earned his B.S. degree in Economics from the University of Pennsylvania's Wharton School.

He served as a bartender after his graduation in Aspen, Colorado where he passed his time fishing, skiing and living in a truck. He campaigned for his father in 2016 presidential campaign serving as a close political adviser to his father. He made his guest appearance as adviser abd judge on the episodes of the TV show The Apprentice. He served at The Trump Organization as trustee and executive director. With his success in business nad entertainment field he earns a whopping amount of money from his career. He holds the stggering net worth of $300 million.

He tied the knot with model Vanessa Kay Haydon on November 12, 2005. The ceremony was held at his father's Mar-a-Lago estate in Palm Beach, Florida in the presence of close friends and family. The duo is blessed with five children, Kai Madison, Chloe Sophia, Donald John III, Tristan Milos and Spencer Fredrick together. The estranged couple announced their separation on March 15, 2018. His wife filed for divorce in Manhattan Supreme Court.

He is yet to receive any award personally, however, has managed to accumulate a number of fan followings. He has more than 1.1 million followers on his Instagram currently.

His picture of the endangered dead wild animals aroused the controversy in 2012 which caused one of the sponsors to drop his father's TV show.