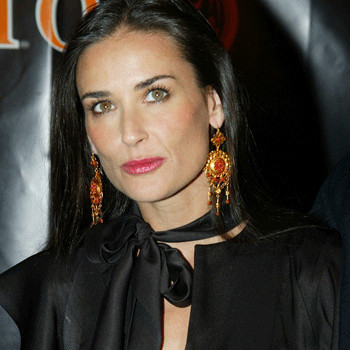 Attended Fairfax High School. Had a quite complicated childhood as her biological father left her mother when she was 3 months pregnant and raised by step father. Came to know the fact when she was 11. Left her home when she was 17.

Had cross-eyed when was a child and went through surgery for its correction. Had suffered from kidney dysfunction. Has a trademark of Sparkling green eyes and husky voice. Had hired three cameramen to record the birth of her first child.

Currently single as she got divorced with her third husband Ashton Kutcher in 2013. They had been married for 6 years. Previously had married to Bruce Willis, from whom she has three children and Freddy Moore. She was once engaged to Emilio Estevez.

Was chosen as one of the 50 most beautiful people in the world by People (USA) magazine. Been the first actress in Hollywood to have reached the 10 million dollar salary mark. Is also a nominee to Golden Globe Award and several others.

There is a rumor about her relationship after divorcing Aston Kutcher but nothing is confirmed yet. Also once been in the controversy for posing nude in the Vanity Fair while she was seven months pregnant.