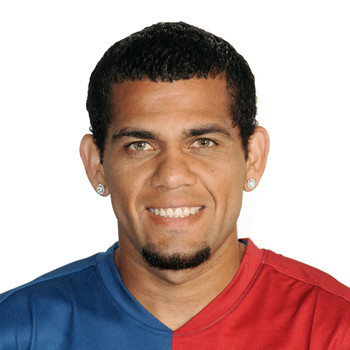 Born in Juazeiro, a city of Brazilian state of Bahia. He was son of a farmer Domingos Alves Da Silva who himself have passion for football. When Alves was young he used to help his father in his farm work.

Beside playing football Daniel Alves is involved in charity work too, He has worked with a lot of diverse charities, some of the honorable mentions are Special Olympics, Barcelona Magic Line, Signed T-shirts for charity, Daniel Alves, against Cancer.

Barcelona's Dani Alves was married to Dina Alves but later they divorced in 2011 after 3 years of their married life. Alves has two children from his ex wife Dina Alves.

Since Dani Alves would be available on a free transfer from Barcelona in the summer,there is lot of rumours if FC Barcelona's defender Daiel Alves will transfer to Manchester United or Livepool.