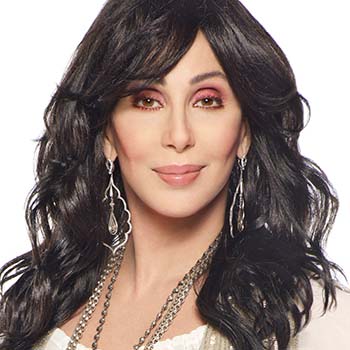 She was born in El Centro, California. Her parents divorced when Cher was ten months old. She was put into foster care when her parents were stricken with poverty.

With "Believe", she became the oldest female artist to have a U.S. number-one song in the rock era, at the age of 52. Cher has sold 200 million records worldwide throughout her career. She is the only artist to date to have a number-one single on a Billboard chart in each decade from the 1960s to the 2010s.

She married Sonny Bono in 1964 and had a son named Chaz Bono. The couple had marital problems and finally got divorced in 1975. A year later after their divorce, she married Gregg Allman.

She is one of the few artists to win three of the four major American entertainment awards - Emmy, Grammy, Oscar, and Tony, and one of five actor-singers to have had a U.S. number-one single and won an acting Academy Award. According to Goldmine magazine's Phill Marder, Cher "has been and remains today one of the Rock Era's most dominant figures".