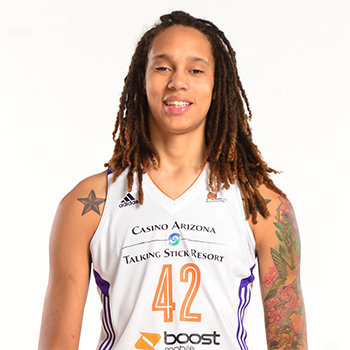 ...
Who is Brittney Griner

She was born in Houston, Texas to Raymond and Sandra Griner. She has three older siblings.Griner attended Nimitz High School in Houston where she played basketball and excelled in it.

She led Baylor University to the 2012 women's national championship and she was named Division I Player of the Year. She was the second NCAA basketball player ever since Yavey Yones to score 2,000 points and block 500 shots.

Griner publicly came out as lesbian in April 2013. In May 2015, she married fellow WNBA player Glory Johnson but Griner filled for annulment just a month later.

Griner won the 2013 ESPY Award for best female college athlete 2012 Honda award for basketball, and the overall Honda-Broderick Cup winner for all sports. She was the 2012 recipient of the Wade Trophy, and Ann Meyers Drysdale Award, in 2012, and again in 2013.

On May 15, 2015, the WNBA suspended Griner and Johnson for seven games each after Griner pleaded guilty to disorderly conduct charges. Griner is also required to complete 26 weeks of domestic violence counseling.