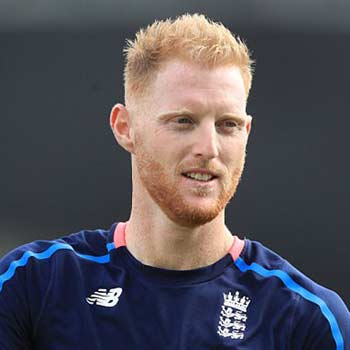 Ben Stokes was born Benjamin Andrew "Ben" Stokes in Christchurch to rugby league player and coach, Gerard Stokes and a cricketer, Deborah. He grew up in West Cumbrian town of Cockermouth in England. He made his international ODI debut on 25 August 2011 against Ireland. She then has made international test debut on 5 December 2013 against Australia.

In 2015, he made a great impression by hitting the 2nd fastest Test century in the match against South Africa. He holds the staggering net worth of $10 million.

He married his long-time girlfriend Clare Ratcliffe in a countryside ceremony on October 14, 2017. The duo dated for several years and got engaged back in 2013. The couple is blessed with a son and a daughter, Layton Stokes and Libby Stokes together. Outside of professional cricketer, he loves to listen to music, and Kevin Petersen and Dale Steyn is his favorite cricketer.

He has made an International record of second fastest Test double hundred regarding balls faced followed by fastest 250 in Tests for which he took 196 balls, second highest number of sixes in Test innings, most runs in a Test innings at the sixth positions and highest Test partnership for the sixth wicket. Moreover, he has won several test awards such as Player of the match awards, Player of the Series awards and Man of the match awards.

He was alleged for being involved in a street brawl in Bristol in September 2017. He along with his mate Alex Hales was taken into custody after that incident. Even though he had pleaded not guilty, he had to miss the second test between England and India. He also got into controversy due to his video pf imitating Harvey Price which was later turned to bully issue.