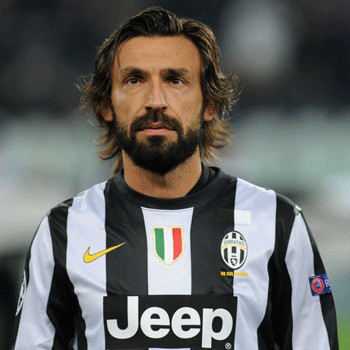 Born in Flero, Italy and began his club career at the age of fifteen with the Brescia Calcio youth team in 1994 and has a brother Ivan who plays for a Serie C2 club in Brescia. His father owned a metal trading company in Brescia called Elg Steel.

With 113 caps, he is the fourth-most capped player in the Italian national team's history. He was selected in Italy's national team squad to play in Brazil at the 2013 Confederations Cup.

He got married to Deborah Roversi in 2001 and have two children son Niccolo born in 2003 and daughter Angela born in 2006. In 2014, they got separated after 13 years of marriage due to Pirlo's affair with a woman he met at his golf club.

He has played at various level from the national team such as U15, U18 and U21 and latter led to victory in the 2000 UEFA European Championship as the Golden Player and Top Scorer of the tournament.

These days Pirlo has been linked with lots of club so far such as Arsenal, LA Galaxy, Tottenham and likely to leave Juventus.