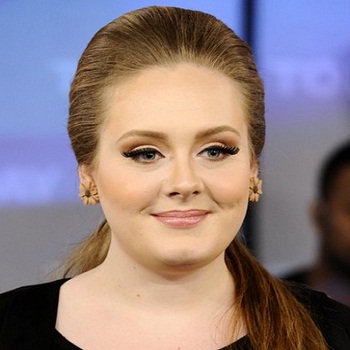 Adele was born on 5 May 1988 in Tottenham, London, the daughter of an English mother, Penny Adkins and a Welsh father, Mark Evans. Adele graduated from the BRIT School for Performing Arts & Technology in Croydon in May 2006.

Adele is an extremely popular and successful British singer/songwriter who has a net worth of $75 million. Adele is one of the highest paid musicians in the world today thanks to smash hits such as "Rolling in the Deep" and "Set Fire to the Rain".

Adele has been in a relationship with Simon Konecki since 2011. She gave birth to her 1st child at age 24, a son Angelo James Konecki on October 19, 2012. Child's father is her boyfriend, Simon Konecki.

She has won her first 2 Grammies at the 2009 ceremony, for Best New Artist and Best Female Pop Vocal. She was awarded the MBE (Member of the Order of the British Empire) in the 2013 Queen's Birthday Honours List for her services to Music.

Adele was a double winner at the Brit Awards in London on Tuesday, but her triumph was mired in controversy after she flipped her middle finger when her final acceptance speech was cut short.