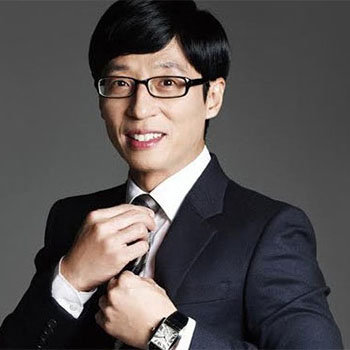 TV host and comedian who is often dubbed the MC of the Nation in South Korea. He was named the most popular Korean comedian between 2004 and 2008. He became the MC on the popular South Korean variety show Running Man in 2010.

He was born in Seoul, South Korea. He briefly studied at the Seoul Institute of the Arts, but failed to matriculate successfully because he was too focused on comedy.

He has hosted several variety television shows in South Korea, including the popular programs Infinite Challenge and Running Man. He is now known for his quick wit and appeal across a wide range of demographics.

He married Na Kyung-Eun in 2008 and they had a son together in 2010. He is nicknamed "The Grasshopper", due to his early appearances where he dressed as a grasshopper.

He won the Favorite Comedian award at the 6th Annual Nickelodeon Korea Kids' Choice Awards in 2013. He has won tons of other entertainment awards.