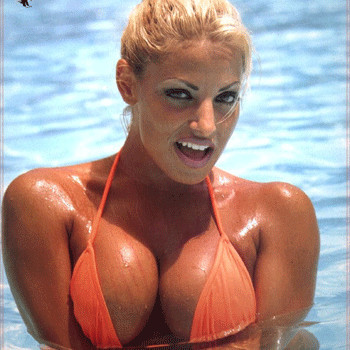 ...
Who is Trish Stratus

Trish Straus spent her childhood in Richmond Hill, Ontario, Canada where she joined Bayview Secondary School. She then attended York University, where she studied biolkogy and Kinesiology and also played soccer and hockey.

Apart from wrestling, Trish also appears on magazine covers and some movies and is also involved in charity work. She has also hosted award and television shows and owns a yoga studio.

Trish is the winner of 7 WWE Women's Championship, the most for any woman and has been inducted into the WWE Hall of Fame on 2013.

Early in her career, Trish has been the part of many sexually indicted rumors and controversies and has gotten into many controversial rivalries in the span of her career.

Patricia Anne Stratigeas, aka Trish Stratus, is a former valet and wrestler for World Wrestling Entertainment (WWE). Before she started to work as a wrestling diva she had enrolled at York University in Toronto; Canada to major in both Biology and Kinesiology with aim of becoming a doctor. But she was being prepared for something other. During her study at York University, the professors were into strike and she was working as a receptionist at a local gym. An agent there discovered her and signed a deal for her to become a fitness model.
During much public appearance as fitness model she once mentioned her great interest in a professional wrestling in Live Audio Wrestling (wan). Right after that many WWE professionals were attracted and they approached her through a letter to make a contract with WWE. She made her official debut on March 19, 2000 for Sunday Night Heat. She had formed tag team of T & A adding Test and Albert.  She turned to be a valet of Val Venis, the then WWE Intercontinental Champion.
She got into controversy in her life due to her short term affair with owner of WWE, Vince McMahon. This led to intense confrontation with Vince’s daughter Stephanie and her. In Wrestlemania 17 she slapped and screwed McMahon out of a match. She turned to become a fixture within women division for she spent most of her time in gym and boost her wrestling capabilities. This brought tremendous victory like her winning of WWE Women’s Championship on 2001. She was voted Internet Babe of the year for three consecutive years, 2001 to 2003. At WWE RAW’s 10th Anniversary she was conferred “Diva of the Decade” award to respect her honor.
Stratus was an asset for WWE Raw for many years as she still involved in stories of different WWE wrestlers. On 2006 September, she completed her book after she had won WWE Women’s Championship for seven times. She quitted professional wrestling after that in order to pursue her other interests. She has entered into entertainment industry and she is already a source of inspiration and icon to international community.