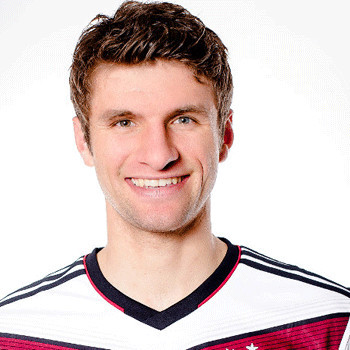 ...
Who is Thomas Muller

He was born in Weilheim in Oberbayern, West Germany. He started his youth career at the young age of 10 from TSV Pahl. Later on in 2000 he joined local Bundesliga side Bayern Munich.

Beside playing football he is also actively involved in charity works.. In 2011 he was appointed as ambassador of YoungWings which is a charity that helps all the children who are victim of bereavement or trauma.

Regarding about his personal life he is married to his longtime girlfriend Lisa Trede. Lisa work as a semi-professional equestrian who works on a farm. Couple got engaged in 2009, December.

He was the part of the team German won FIFA World Cup: Winner: 2014 which is his greatest achievement. Individually he has been awarded with FIFA World Cup 2010 Man of the Match: vs. England, vs. Uruguay, FIFA World Cup Golden Boot: 2010 and many more.

In 2014 FIFA worlcup he was all over headlines when he became victim of Pepe's headbutt in the 37th minute, resulting red card for Pepe. He was criticized for overplaying the situation.