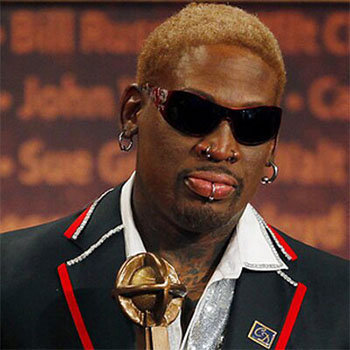 ...
Who is Dennis Rodman

Born in Trenton, New Jersey to his parents Shirley and Philander Rodman, Jr. Raises by his single mother as his father left them. Since his school days he used to played basketball.

Rodman has a calculated net worth of $1 million. Once her dated renowned singer Madonna. Also a professional wrestler. He was the winner of the reality TV series Celebrity Mole. His trade mark is his dyed hair and lots piercing.

Rodaman was married three times. Firstly he was wed locked with Annie Bakes and had one daughter. Then he hooked up with Carmen Electra. Lastly he tied a knot with Michelle Moyer with whom he had one son.

He was inductee of Naismith Memorial Basketball Hall of Fame,Celebrity Championship Wrestling,NBA Defensive Player of the Year, NBA Champion, NBA All-Star among others.

He attempted a sucide when he was in his young days and face lots of charges and controversies. He has also kicked a cameraman. Arrested for domestic disturbance, drunken driving and driving.