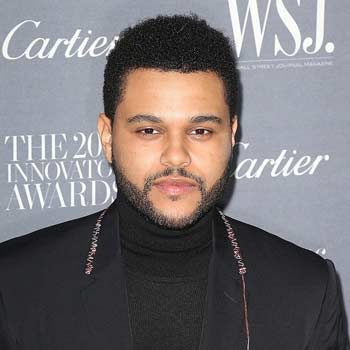 He was born to Ethiopian immigrants but has had little contact with his father, who left him when he was a toddler. His grandmother raised him and from the age of 11, he began smoking marijuana and later moved on to harder drugs. He went to West Hill Collegiate Institute and Birchmount Park Collegiate Institute.

He had top two release in Kiss Land in 2013 on the US Billboard 200. He earned eight top-ten entries on the Billboard Hot 100: "Love Me Harder" with Ariana Grande, "Earned It," "I Feel It Coming," and "Pray for Me" with Kendrick Lamar, "Call Out My Name." Outside of singing and music, he is the philanthropist and raised funds for several charitable organizations in Canada. He earns a lucrative amount from his singing career. He holds the jaw-dropping net worth of $50 million while grossed $90 million from record sales, touring, and merchandise.

The handsome singer dated several divas. He dated American model, Bella Hadid from 2015 until 2016. As a couple, they also made a red carpet appearance at Grammy Awards. Splitting up with Hadid, he briefly started dating American singer and actress, Selena Gomez in January 2017 and eventually, they broke up in October 2017.

Throughout his career, he has won nine Juno Awards, three Grammy Awards, eight Billboard Music Awards, and Two American Music Awards along with the nomination for one Academy Award.

He is rumored to have dated with 21-year-old model Yovanna Venture. They were seen holding hands together at the rapper French Montana's birthday party. He was arrested for punching a Las Vegas police officer in January 2015, and sentenced to 50 hours of community service.

Height of The Weeknd