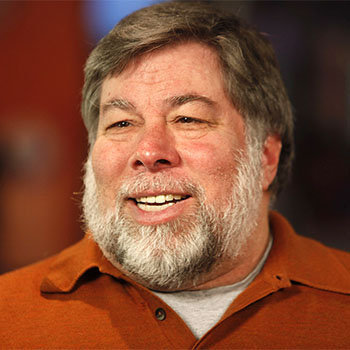 ...
Who is Steve Wozniak

Steve Wozniak is an American inventor, electronics engineer, programmer, and technology entrepreneur who co-founded Apple Inc. He is known as a pioneer of the personal computer revolution of the 1970s and 1980s, along with Apple co-founder Steve Jobs.

Steve Wozniak was born in San Jose, California to Margaret Elaine (Kern) and Jacob Francis "Jerry" Wozniak. Despite being extremely bright and intelligent, routine schooling and rote learning bored him. He gained admission at the University of California. He earned his bachelor's degree in computer science and electrical engineering in 1986 after retiring from Apple.

Wozniak co-founded Wheels of Zeus in 2001, to create wireless GPS technology. In 1976, the first generation of Apple computer, titled Apple I was created by him as he could not afford one.

Wozniak was married to Candice Clark from June 1981 to 1987. They have 3 children together. Wozniak is married to Janet Hill, an Apple education development executive. With Janet he has 2 children.

In 1979, Wozniak was awarded the ACM Grace Murray Hopper Award. In 1989, he was awarded an honorary Doctor of Engineering degree from the University of Colorado at Boulder. In 2011, he was presented Isaac Asimov Science Award by the American Humanist Association and Global Award of the President of Armenia for Outstanding Contribution to Humanity Through IT.

Kevin York Systrom well-known as Kevin Systrom is an American entrepreneur and programmer co-founded the Instagram on October 6, 2010, along with his partner Mike Krieger.

An American businesswoman, entrepreneur and CEO known for being the founder of the blood-testing company Theranos which she founded in 2003 and is currently under federal criminal investigation.