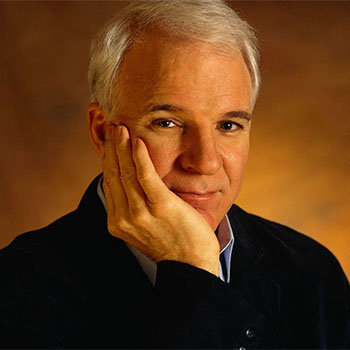 He was born in Waco, Texas and raised in Inglewood, California, and then later in Garden Grove, California, in a Baptist family. His first job was at Disneyland, selling guidebooks on weekends and full-time during the school's summer break.

Playing the banjo from an early age, he released his debut music album The Crow: New Songs for the 5-String Banjo in 2009 and it went on to win the Grammy Award for Best Bluegrass Album. His 1978 comedy album A Wild and Crazy Guy went 2x platinum in the United States.

He was married to Victoria Tennant from 1985 to 1994. He married his second wife, New Yorker journalist Anne Stringfield, in July 2007. He became a father for the first time when Stringfield had a child in December 2012.

He has won an Academy Award, several Grammy Awards, People's Choice Awards, and many others.5