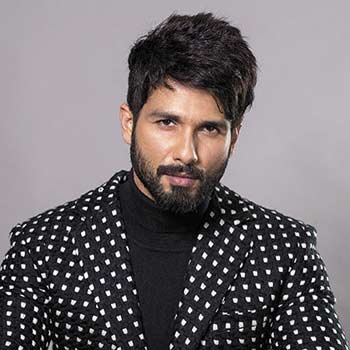 ...
Who is Shahid Kapoor

He was born in Delhi, India to actor Pankaj Kapoor and actress Neelima Azeem. His step-mother Supriya Pathak is also an actress. He grew up along with his brother, Ruhaan Kapoor, sister, Sanah Kapoor and half-brother Ishan Khattar. He went to Gyan Bharati in Delhi and Rajhans Vidyalaya in Mumbai. He graduated from Mithibai College in Mumbai. Growing up in razzle and dazzle of acting, he developed an interest in entertainment field from the very young age. He joined Shaimak Davar's Academy to learn dancing.

He began his career from the very tender age appearing in the ad of 'Complan' with Ayesha Takia. He worked as assistant director in TV serial, 'Mohandas B.A.L.L.B.' He also served as a background dancer in the movies like 'Taal' and 'Dil Toh Pagal Hai.' As an outcome of his struggle, he soon landed the lead role in the film Ishq Vishq in 2003. He gave his impressive performance in the movies including Vivah, Chup Chup Ke, Kaminey, Haider and many others. His recent starred film Padmavat has grossed over $5.45 billion worldwide. He is now one of the demanded actors of Bollywood. Additionally, he has given several stage performance and hosted as well as co-hosted numerous awards functions. Likewise, he is the first Indian actor to fly an American F-16 aircraft. He charges INR10 Crore per film he featured in which clearly shows his worth in the field. His current estimated net worth is INR186 Crore. He also earns his fortune as a brand ambassador of brands like Samsung, EIf Aquitaine, Pioneer, and Colgate. He has a collection of several cars and bikes such as Porsche Cayenne GTS, Mercedes-Benz GL-Class. Jaguar XKR-S, Range Rover Vogue, Harley Davidson Fat Boy and Yamaha MT-01. Aside from acting, he is fond of Travelling and collecting branded watches.

He tied the knot with the gorgeous lady, Mira Rajput, a Delhi based girl who was not involved in the film industry. His wife Mira is 14 years younger than him. The duo first met through the religious group Radha Soami Satsang Beas. Their marriage became the talk of the town while grabbing the utmost attention of the media and fans. The ceremony was held in a low-key gurudwara at a friend's farmhouse in Gurgaon on July 7, 2015, and was done in the presence of close friends and family outholding total of 40 guests. The bride was seen in simple attire of pink and green churidar suit alongside heavily emblazed dupatta while groom aka Kapoor was seen in white kurta-pajama with an orange turban while tying the knot. Their grand reception was held in Mumbai which was attended by Bollywood's creme de la creme. The duo is blessed with a daughter, Misha. He has a dating history with Bollywood Divas like Kareena Kapoor and Priyanka Chopra.

This skillful actor has not only received the nominations for Best Actor for several times but also has won the awards including three Filmfare Award for Best Male Debut, Critics Award for Best Actor. He was ranked the top in 50 Sexiest Asian Men in the World by British Magazine Eastern Eye in 2017 followed by ranking fifth among 50 most-desirable men on The Times of India. He has numerous fan followings from all over the world with 13.5 million following his Instagram account @shahidkapoor.

He was rumored of having a relationship with Tennis player Sania Mirza. He faced the controversy when the MMS of him and his ex-girlfriend Kareena Kapoor making out was leaked. He faced dispute with director Priyan while filming Chup Chup Ke and was accused of dictating a particular scene.

One of the legendary actor, producer, business man, dancer and politician from India. He is also associated with India National Congress. His biggest hit movie is Gharana Mogudu.

Barry Pepper is a Canadian actor. He is best known for his roles like Jonnie Goodboy Tyler in Battlefield Earth, Sergeant Michael Strank in Flags of Our Fathers, Dean Stanton in The Green Mile, Private Daniel Jackson in Saving Private Ryan.