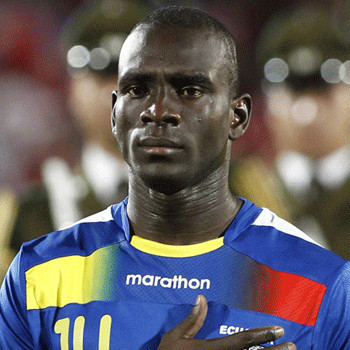 ...
Who is Segundo Castillo

He spent his childhood in San Lorenzo, Esmeraldas. He started his career playing football with Quito's Club Deportivo Espoli. He there spending 3 years appeared in 66 games and did 11 goals.

He belongs to black ethnic background. His birth name is Segundo Alejandro Castillo Nazareno. He weighs 75 kg. which is a normal weight for player. In 2000 he started his professional career with Espoli.

He is a happily married man. He got married to beautiful Brenda Castillo. The couple is blessed with a son named D’Alessandro Castillo. His son was born in March 2009. He is also called by his nickname Casti.

In 2005 he started his international career with his midfielder friend Fidel Martinez joining Ecuador national football team. On 17 August he played as a substitute against Venezuela.

He was rumored to be back in Everton.