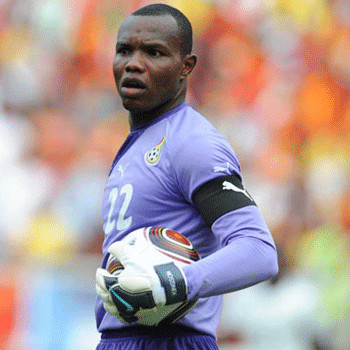 ...
Who is Richard Kingson

Richard was born in Accra, Ghana that he left for turkey for a higher Football career. He played for several turkish clubs and clubs like Hammarby, Brimingham City, wigan Athletic and Black Pool in England.

He is currently 36 years old and weighs 87 kgs. He is of Black ethnicity and well known as Faruk Gursoy. He was suspended from playing football in 2005 for 6 months after he failed his doping test. His name is often mistaken as Kings't'on .

He is married to Adelaide Tawiah . The couple are often subjected under controversy. The couple donot have children but there are rumors about extra marital affair. Although there are no reports about divorce or splitups.

He was the vice captain of the Ghana National Football team and is the most capped player with 90 total caps. He has won the silver medal in the Africa Cup for his excellent goal keeping and is the first choice goal keeper in Ghana.

A controversy arose when Richards wife confessed of using spirits to dissolve Richards career and rendered him impotent while praying in a church in nigeria. This became the matter of immense controversy for many months.