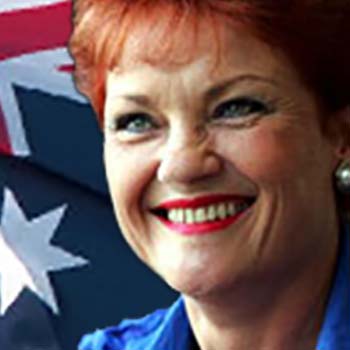 ...
Who is Pauline Hanson

Hanson was born in Brisbane, Queensland to Jack Seccombe and Hannorah Webster Seccombe. She is the fifth of seven children. Hanson left school at the age 15.

In 1994 Pauline entered politics for the first time and was elected as a councillor on the Ipswich City Council till 1995. On 2nd March 1996 she won the title as the first Independent woman to hold a seat in the House of Representatives. In 1998, Pauline Hanson’s One Nation won 11 seats when it contested the Queensland state election.

Hanson married her first husband, Walter Zagorski, a Polish refugee in 1971. They together have 2 children, Anthony Zagorski and Steven Zagorski. She then in 1980 married Mark Hanson, a tradesman. They have two children together, Adam Hanson and Lee Hanson.

In March 2007, Hanson published her autobiography Untamed and Unashamed. She has established a political brand of being an everyday Australian who once ran a fish and chip shop.

Hanson is regarded as a controversial politician of Australia.