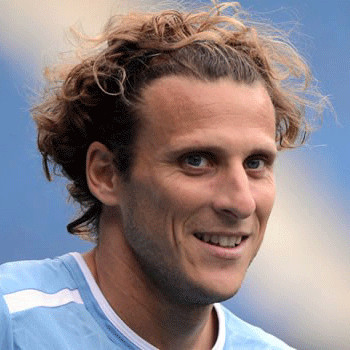 He was introduced into sports at a young age. His father was also a footballer who played for Sao Paulo and the Uruguay International Team. He participated in the World Cup of 1966 in England.

He is the highest paid player in the country after moving to Cerezo Osaka. His annual Salary was 4.98 million BRL in 2012. He is known as the Top scorer in 2010 world cup.

He began a relationship with Argentinian model Zaira Nara in 2008. They became engaged in March 2011, but separated in June 2011. He is now married to Paz Cardoso, a hockey player.

He won 3 titles with Manchester United: Premier League (season 2002-03), Community Shield (2003) and FA Cup (2004). He won the Pichichi Trophy and the European Golden Shoe. He received the Golden Ball as the best player at the 2010 World Cup.

There is a transfer Rumor of Forlan moving to FC Barcelona in the upcoming days.