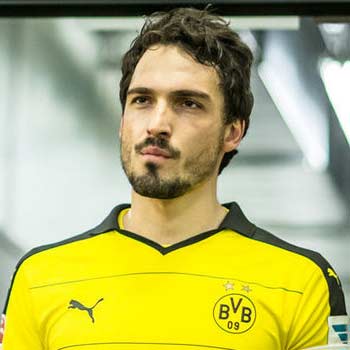 Mats Hummels was raised in his hometown along with his younger brother Janas Hummes who is a retired footballer; did not play further due to multiple injuries. He got early inspiration to become a footballer and joined the Bayern Munich's youth soccer academy at the age of 6.

Mats Hummels tied in the knot with his longtime partner, Cathy Fischer in 2015. Their wedding was organized at the Mandelstrasse registry office in Berlin His wife, Cathy Fischer, was named as Germany's WAG of the year for 2013. As per the sources, the two has been together when Hummels was 19. He is also the philanthropist and associated with several charitable institutions. He went to join the Common Goal project in August 2017 and became the second footballer to donate 1% of his salary to a collective fund which helped football organizations to generate sustainable social development all over the world.

Mats Hummels has numerous awards and accomplishments on his wardrobe: ESM Team of the Year, FIFA World Cup All-Star Team, UEFA Europa League Squad of the Season (2015-16), Bundesliga Team of the Season: 2015–16, 2016–17.

Mats Hummels has not been the part of any rumor and controversy.