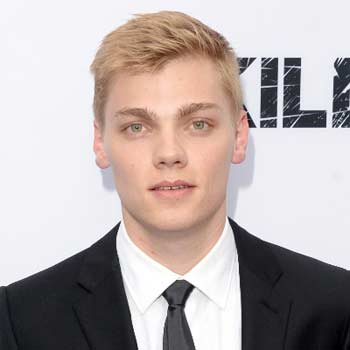 Levi Meaden is a Canadian television actor most recognized for his role as A.J. Fielding in the popular Netflix series The Killing. He is also known for his portrayal of Matt Copeland in the TV series Aftermath.

He was born in Saskatoon, Saskatchewan while grew up in Calgary, Alberta. He raised along with his brother Colton. He studied writing and directing at the Prague Center for Film Education.

He started his acting career performing in local theatre productions at an early age of 12. His portrayal as Brett in the straight-to-video movie 1313: Bigfoot Island rose his fame to a prominent level. His upcoming movie all set to release on May 11, 2018. No wonder he earns a lucrative amount from his acting career. His current estimated net worth is $1 million according to the source.

He is currently dating an Emmy award-winning actress, Ariel Winter. The duo started dating since 2016. As his girlfriend is fond of animals and especially dogs, the couple got four Samoyed, French bulldog, Westside German Shepherd and a furry dog named Casper, Rocco, Chloe, and Cash. Along with the Ariel Winter, he has shared his relationship, and the posted pictures reflect how happy they are together. Previously, Ariel dated Cameron Palatas and Laurent Gaudette.

He is yet to receive any specific awards but as an incredible actor has managed to accumulate numerous fans all over the world. His Instagram has reached 49.2k followers.

There were rumors in the media his girlfriend Ariel Winter hooked up with Australian actor, Callan McAuliffe.

Ollie Barbieri is a young,energetic and phenomenal actor from United kingdom. He is best known for portraying a character of JJ Jones in the hit British TV drama Skins.

Multi talented, David Zepeda is an actor and singer. He is also an established model and is popular for his participation in Manhunt International 2000 pageant