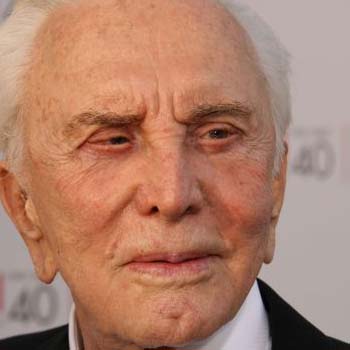 Kirk was born as Issur Danielovitch Demsk in Amsterdam, New York, United States to Bryna "Bertha" and Herschel "Harry" Danielovitch. His parents were Jewish immigrants from a place now known as Belarus.

He's been in a List-A among Hollywood artists. He has the net worth of $60 million dollars. He has Gravelly voice and Dimpled chin, known for portraying serious dramas.

He is married twice and has four children all together. He was married with Diana Douglas on November, 1943 but got divorce on February 23, 1951. He later married his present wife on 29 May 1954.

He has received the highest US honor 'Presidential Medal of Freedom' from President Jimmy Carter on 17th January 1981. He has also won several awards including Honorary academy Awards.

There is a rumor that Douglas raped Natalie Wood.