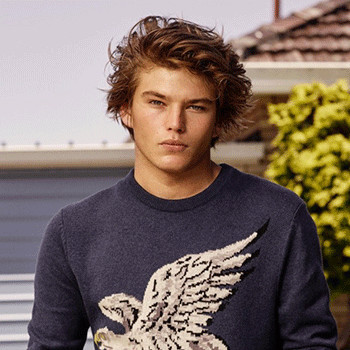 ...
Who is Jordan Barrett

Jordan was born in Byron Bay, New South Wales, Australia as a son of Julie Barrett and Adrian Barrett (drug dealer). In 13 years old he initiated his modeling career.

In Instagram his followers are clocked up to up to 400,000 followers. He has got tattoo in his left arm which is written 'Only the Good'. His hair color is blonde and his eyes are blue.

In 2015 he was in relationship with Paris Hilton. Later he himself said that he was not dating her. Currently he is single.

Lots of media sources are saying that he has undergone the surgery after seeing drastic change on his face. He has not said any thing about the surgery. He was also caught holding a hand of Lara Stone. But both of them shut their mouth.