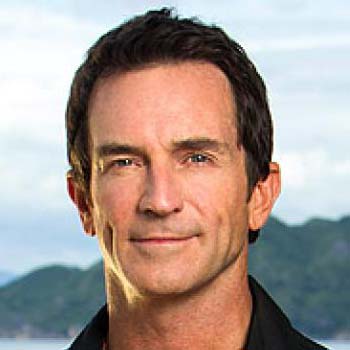 Probst was born in Wichita, Kansas to Jerry and Barbara Probst, and grew up in Bellevue, Washington. He graduated from Newport High School in 1979 and attended Seattle Pacific University.

Jeff Probst is an American reporter, producer, and an Emmy award winning reality show host who has net worth of $40 million. His first job was at Boeing where he produced, sales and marketed videos.

Probst was married to his first wife, Shelley Wright, from 1996 to 2001. He married his second wife, Lisa Ann Russell, on December 5, 2011.Through this marriage, he became a stepfather to Russell's two children, son Michael (born in 2004) and daughter Ava (born in 2006), from her former marriage.

Probst has won The Primetime Emmy Awards for Outstanding Host for a Reality or Reality - Competition Program “Survivor” in the consecutive year 2008, 2009, 2010 and 2012.

There is a rumor circulating that Probst, the host of “Survivor”, has been dating Julie Berry, 24 year old “Survivor: Vanuatu” contestant.