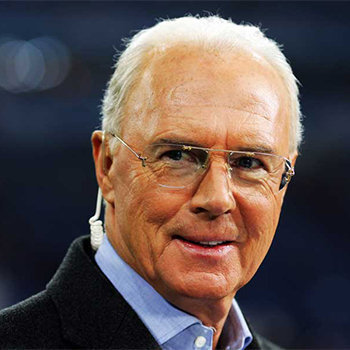 ...
Who is Franz Beckenbauer

Franz was born in the post-war ruins of Munich, the second son of postal-worker Franz Beckenbauer, Sr. and his wife Antonie. He grew up in the working-class district of Giesing. He began his youth career with SC 1906 Munchen in 1951, before joining the Bayern Munich youth team in 1959.

"Franz Beckenbauer symbolises football and a winning mentality. On top of that, he brought the World Cup to his own country. We're proud of him." —German tennis player Boris Becker.[11] "He's the hero of our nation. It hasn't happened by chance, he's earned it by hard work." —West Germany team-mate Günter Netzer.[11] Beckenbauer is widely considered to be one of the greatest footballers in the history of football. He is often credited as having invented the role of the modern sweeper or libero, a defensive player who intervenes proactively in the offensive game of his team.

Beckenbauer has been married three times and has five children, one of whom, Stephan, was a professional footballer, who died after a long illness on 1 August 2015, at the age of 46.

He was a two-time World Soccer Magazine Player of the Year (1972 and 1976) and a four-time German Footballer of the Year during his career.

After appearing in an ad for a big mobile phone company, Beckenbauer specifically requested the number 0176 / 666666 for his mobile phone. However, he soon was flooded with phone calls by men who thought it was a phone sex number.