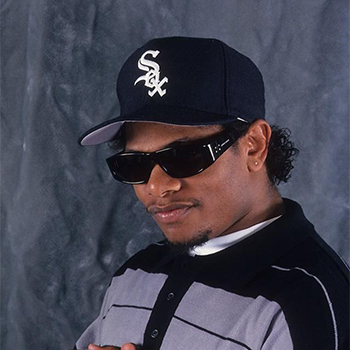 Eric Lynn Wright better known by his stage name Eazy-E was an American rapper who performed solo and in the hip hop group N.W.A. Wright is affectionately called "The Godfather of Gangsta Rap".

Rapper Eazy-E was born Eric Lynn Wright in Compton, California, Los Angeles. He dropped out of high school but later received his GED and worked as a drug dealer for a time being.

Eazy-E had a total net worth of $8 million before he died. Wright supported himself primarily by selling drugs, introduced to the occupation by his cousin. Wright was also labeled as a "thug". In 1986, at the age of 22, Wright had earned as much as US $250,000 from dealing drugs.

In 1995, Eazy-E married Tomica Woods whom he met at Los Angeles nightclub in 1991. They married twelve days before his death. They had a son named Dominick and a daughter named Daijah (born six months after Eazy-E's death). He had a son Eric Wright Jr and daughter Ebie before marriage. In 2015, his oldest son Eric in an interview said that his father has total children of atleast 10 from different women.

Five of Eazy-E’s albums have been awarded a certification by the Recording Industry Association of America (RIAA).

There is a rumor that behind the death of Eazy-E, there was a conspiracy. Eazy-E was purposefully injected HIV positive virus while attending acupuncture.