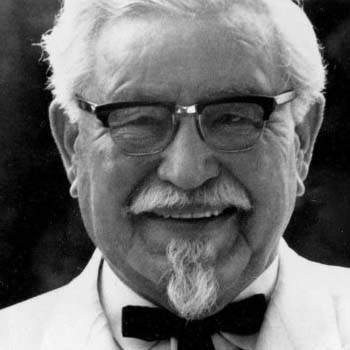 ...
Who is Colonel Sanders

Colonel was from the middle class family. He was born to Wilbur David and Margaret Ann Sanders in Henryville, Indiana, USA. He was an American and was of diverse descent.

Colonel was homeless twice in his early life. He was not a good student as he left his high school and began working in the farm. His mother got married for the second time when he was just in his early teens. He died with approximately $3.5 million but now KFC is estimated to have $15 billion.

Colonel was married twice. He was married to Josephine King and they were together between 1909 and 1947. After the separation with her, he married to Claudia Price in 1948.

It was rumored that he got divorced with his first wife as he was having extra affairs.