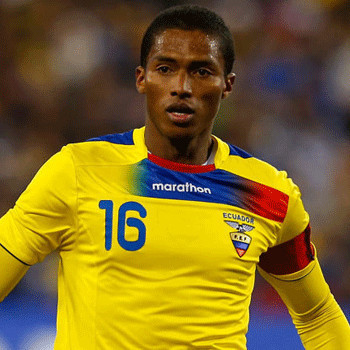 ...
Who is Antonio Valencia

His birth name is Luis Antonio Valencia Mosquera.He was born in Lago Agrio. He used to help his mother to sell drinks outside the stadium. At the age of 16 be begun to play for El Nacionalin salary of 50 dollars a month.

He is of black ethnicity and described as a shy boy. He has the weight of 78 kg. He had made 84 appearances for the El Nacional and scored 11 goals. He owe the net worth of 5 million GBP.

Having an affair with Domenica Valencia he married to her and also he divorced with her. He is now having happy married life with Zoila Valencia. He had his first daughter with his wife Zoila.

He has won the 2005 Clausura Tournament. Valencia earned his first international cap on March 2005 and scored two times in his first cap. He played world cup in 2006.