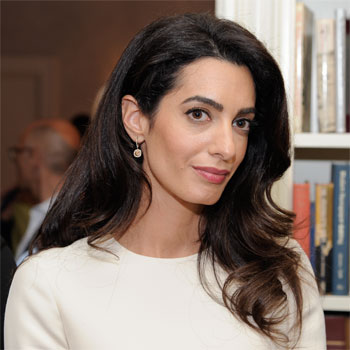 Her father Ramzi Alamuddin was a professor at American University and her mother Baria Alamuddin served as a journalist. She received her BA degree Jurisprudence (Oxford's equivalent to the LLB) from St Hugh's College, Oxford. That same year, she joined New York University School of Law to study for the LLM degree.

Besides her professional career, she is the philanthropist and served as the president of the Clooney Foundation for Justice. She has a whopping net worth of $10 million. She also enjoys the net wealth and income of his husband, which is around $500 million.

She married American actor George Clooney after having a long affair. The couple celebrated their wedding on 27 September 2014 in Venice's city hall at Ca' Farsetti. The duo was married by Clooney's friend Walter Veltroni, a former mayor of Rome. On February 9, 2017, it was reported from several sources, and that they were expecting twins. On June 6, 2017, Amal gave birth to a daughter, Ella, and a son, Alexander. Previously, George Clooney married actress Talia Balsam in 1989 and divorced in 1993.

She received the Jack J. Katz Memorial Award for excellence in entertainment law. Moreover, she was selected as Barbara Walters' Most Fascinating Person of 2015, and at the 2014 British Fashion Awards, Clooney was shortlisted for Best British Style alongside David Beckham, Kate Moss, Keira Knightley and Emma Watson

So far, she has never been reported to have indulged in any kind of rumor and controversy.

Rachel Sklar is a very beautiful lawyer and also a New York based media blogger.She is also very famous for various reasons and is also a CNN contributor.