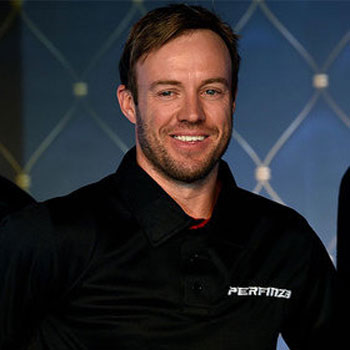 His mother Millie works as a property dealer and his father Abraham Benjamin is a doctor. He is the youngest of his siblings, Jan and Wessels. He attended high school, Pretoria where he mate his teammates and current captain of South African ODI team, Faf du Plessis. Besides his cricket career, he is also a keen player of golf, tennis, and rugby.

He married his long-term girlfriend, Danielle after having an affair on March 30, 2013. He proposed his wife in front of the iconic Taj Mahal in Agra that he also mention on his AB: The Autobiography. The couple first baby boy, whose named AB was born in 2015. He is also a guitarist and singer. Moreover, he is a fan of Manchester United. Tiger Woods and Roger Federer are his favorite sports person.

He won South African Cricketer of the year award during the 2014 CSA Awards at the Sandton Convention Center in Johannesburg on June 04, 2014.

There are no any rumors and controversy regarding his personal and professional life.