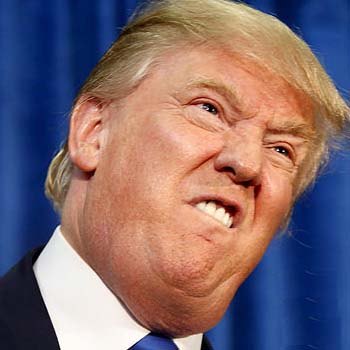 Trump was born in Queens,New York City as a son of Fred Trump and Mary Anne MacLeod. He has four siblings. He graduated form Fordham University and University of Pennsylvania, Wharton School in Economics. Later he joined his father real estate development business.

According to the Forbes he has jaw dropping net worth of $4.5 billion and $250 million salary. Many authors has written a books about him. He has got very unique shape of hair and most of people make a jokes of it. He has also appeared in movies like Home Alone 2: Lost in New York, Wall Street: Money Never Sleeps among others.

Donald has been married three times. Firstly he tied a knot with Ivana Zelní?ková with whom he had 3 children. Then wedlocked with Marla Maples and have one child. Currently he married to his wife Melania Knauss and blessed with one son.

He has received star in Hollywood Walk of Fame, Liberty Award,Marine Corps Leadership Award, WWE Hall of Fame, honorary doctorate in business by both Liberty University and Robert Gordon University among others.

He has faced many legal issues and controversies like Chapter 11 bankruptcy when he was not able to pay the agreement. He put his personal income in debt as well. He was charged by court against his racial discrimination behavior. He paid his most of the debts by giving up hisTrump Princess yacht and Trump  shuttle.