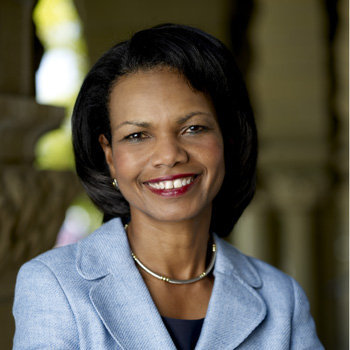 ...
Who is Condoleezza Rice

She planned to pursue a higher education as a piano major.Rice was born in Birmingham, Alabama, the only child of Angelena Rice, a high school science, music, and oratory teacher, and John Wesley Rice, Jr., a high school guidance counselor and Presbyterian minister.

She taught Political Science at Stanford University and in 2012, she was one of the first two women to ever become a member of Augusta National Golf Club.She was preceded by Colin Powell as Secretary of State.

Rice has never married and has no children.She was briefly engaged to football player Rick Upchurch in the 1970s.She left him because, according to her biographer Marcus Mabry, "She knew the relationship wasn't going to work."

Rice has appeared four times on the Time 100, Time magazine's list of the world's 100 most influential people. Rice is one of only nine people in the world whose influence has been considered enduring enough to have made the list—first compiled in 1999 as a retrospective of the 20th century and made an annual feature in 2004—so frequently.