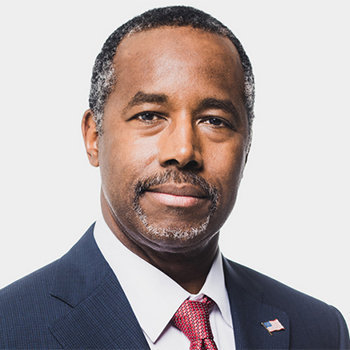 American retired neurosurgeon and politician who worked at John Hopkins Hospital. He became a 2016 presidential candidate and he quickly rose in the polls alongside Donald Trump.

He released the book America the Beautiful: Rediscovering What Made This Nation Great in 2011. He was the Director of Pediatric Neurosurgery at Johns Hopkins Hospital in Maryland from 1984 until his retirement in 2013.

He married Candy Carson in 1975 and lived in Howard County, Maryland before moving in 2001 to West Friendship, Maryland, where they had purchased a 48-acre property. They have three children together, Murray, Benjamin Jr., and Rhoeyce.

He was awarded the Presidential Medal of Freedom by President George W. Bush. In 2000, he received the Award for Greatest Public Service Benefiting the Disadvantaged, an award given out annually by Jefferson Awards.

Bennet Omalu is an physician, forensic pathologist, and neuropathologist. He was the first to discover and publish findings of chronic traumatic encephalopathy (CTE) by examining American football players. He is also chief medical examiner of San Joaquin County, California, and professor in the University of California.

Garth Fisher is a world-renowned an American plastic surgeon who is board-certified by the American Board of Plastic Surgery. He specializes in aesthetic/cosmetic plastic surgery of the face, nose, breast and body.

American retired neurosurgeon and politician who worked at John Hopkins Hospital. He became a 2016 presidential candidate and he quickly rose in the polls alongside Donald Trump.